Discovering the queens of the wind

There are different ways to navigate the sea. The enthusiastics say that the only way is sailing it. The world of sailing is done by direct contact with the natural elements, slow rhythms, evocative silences, sea and wind knowledge. Head and shoulder above the motor boats. But, for the non-experts, sailing is synonymous with on-board life challenging and no comfort. This is only partially true. We are going to present saling yachts that have hulls long from 66 up to 144 meters, a width of up to 15 meters and two or three tall trees that measure twice as much the Tower of Pisa. Ladies and gentelmen: the largest vessels in the world!

The 66 metre  AHIMSA  (ex-Aglaia) was the largest Vitters to date when she was launched in 2011. She has a huge composite rudder from Green Marine, giving her great steering and manoeuvrability. The 83 metre carbon fibre mast was built by Southern Spars and delivered to the Netherlands in two pieces. The main sail can be hoisted in less than two minutes and it only takes 30 seconds to tack the yacht. The artwork on the Code 1 sail is the world's largest artwork on canvas.

Dykstra & Partners Naval Architects were part of an international team of experts that came together to make this special project a success. HETAIROS's design features a plumb bow, long bowsprit, a traditional sheer line and long overhang. A lot of attention has been given to the styling and design of the classic deck joinery, fabricated with the latest low weight and high tech materials. Similarly, for her interior, Rhoades Young Design undertook extensive research in order to design a ‘ground breaking’ light-weight interior.

The 75.12 metre  PHOCEA, built in 1976 by Dcan, had several refit interventions, the last in 2000, who have returned her to its ancient splendor. The yacht has accommodation for 12 and has reached a top speed of almost 20 knots under sail. She is currently available for charter.

Built by Vosper Thorneycroft , M5 was launched as the iconic yacht Mirabella V in 2004. She remains the world’s largest sloop to date. The new owner renamed her M5 and she was extended by 3.2 metres in a refit before her relaunch in 2013. M5 has a displacement of 780 tonnes (165 tonnes of which is the keel). Her carbon fibre mast is an amazing 88.3 metres tall and can carry approximately 3,700 square metres of sail. 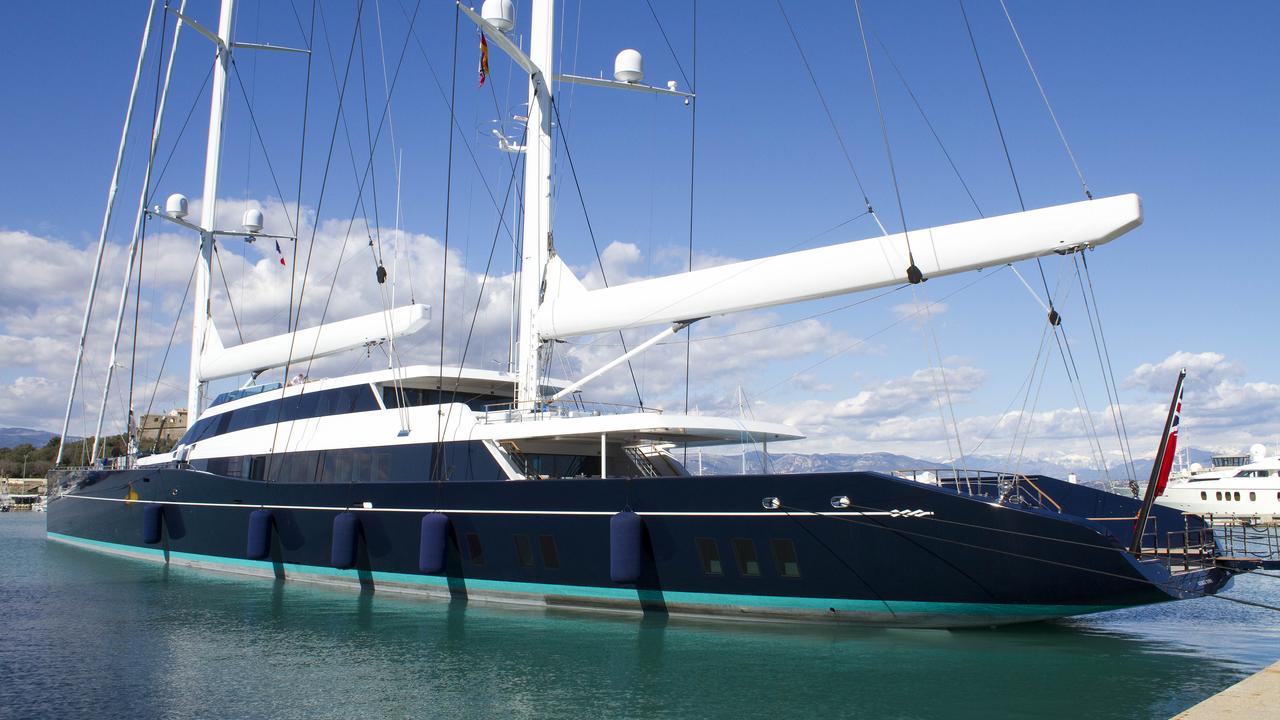 The highly anticipated AQUIJO was the result of a collaboration between Vitters and Oceanco.
This innovative superyacht brings together fantastic sailing performance, the latest in technology and reliability, excellent layout and space, as well as complete comfort and luxury. Timeless styling, beautiful furnishings and sumptuous seating feature throughout to create an elegant and comfortable atmosphere. AQUIJO's impressive leisure and entertainment facilities make her the ideal charter yacht for socialising and entertaining with family and friends. Her one-of-a-kind steering system translates the hydrodynamic of the underwater rudder blades directly to the flybridge steering wheels, offering the helmsman an immediate feedback and acute sensitivity to the feel of the boat. This provides for pleasurable sailing at maximum potential.

MALTESE FALCON was built by Perini Navi for the American venture capitalist Tom Perkins. The iconic three-masted schooner is the second largest sailing yacht in the world. Her Falcon Rig is made up of three unstayed, 'weapons-grade' carbon fibre masts, with a fully computerised sail and rotating mast system. The system has been dubbed a triumph of design, development and engineering and MALTESE FALCON has topped an impressive 24 knots under sail. This beautiful high-tech miracle is able to cross the Atlantic Ocean in 10 days.

ATHENA was built by the Royal Huisman Shipyard in Holland for US software developer Jim Clark. Her advanced engineering means that the iconic ATHENA is able to sail in relatively light airs, while still offering the interior space normally only found on motor yachts. In stronger wind she has been credited as attaining 19 knots under sail. Her three closed deck include a large owner's suite, four guest suites, a saloon and dining room on the main deck and a sky lounge on the upper deck.

EOS was built in Germany under a cloak of secrecy for her American media and movie mogul Barry Diller. She is a three-masted Bermuda rigged schooner and was refitted at Royal Huisman in 2011. After emerging from her refit she caught fire in Norway and had to return to the yard to be repaired.

SEA CLOUD was designed by Cox & Stevens in 1913 and built as Hassar II by Friedrich Krupp in Kiel, Germany for Edward F Hutton and heiress Marjorie Merriweather Post. Following their divorce Marjorie kept the yacht and renamed her SEA CLOUD. Then, after serving during World War II, she was owned by the Dominican Republic dictator Rafael Trujillo, who renamed her Angelita, then by Clifford Barbour, who renamed her Antarna. She was rebuilt in 1978 by new German owners, who changed her name back to SEA CLOUD. She has 60 crew and 34 guest cabins and is now available for luxury charter all year round.

Designed by Philippe Starck and built by Blohm + Voss in Germany, the SAILING YACHT "A" has quickly become the most loved and loathed ship on the sea. She is technically the largest sailing vessel in the world: she measures 468 feet/144m long, her three, free standing carbon fiber masts are well over 300/ 91.4m feet tall. This impressive new steel-hulled yacht is certainly setting standards all over the world: “A” has eight decks, is equipped with an underwater observation area, a helicopter pad, an on-deck swimming pool, and as you would expect, all the latest computerized control systems one could imagine. Owned by Russian businessman and billionaire Andrey Igorevich Melnichenko, SAILING YACHT “A” is staggering not only in her proportions but also in her price tag, reportedly well over $400 million.